Kola nut commonly called bissy in Jamaica is always in most people cupboards (US it is called pantry)It is used as a home remedy to stop food poisoning or cure food poisoning. 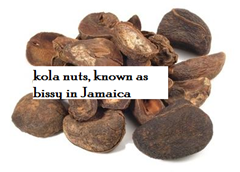 Some people have allergy reaction after eating canned meat such as sardines and tin mackerel, and seafood such as lobster and crab. Use kola nut (bissy) to treat the condition.

Kola nut commonly called bissy in Jamaica, came to the island on a slave ship in 1680. Bissy was formerly an ingredient in cola bottle drinks. It is widely regarded for its medicinal properties because of its effect as an antidote for poisons. It relieves menstrual cramps, headache, gout, rheumatism, jaundice, nausea, vomiting, and indigestion. Bissy is further used in birth control preparations, aids in the control of diabetes, and overweight. The drink comes from the seed that is grated and brewed. It can be sweetened with sugar or honey. Some people say they drink it when they are ill but some say they just drink it as a tea for the great flavour.

To prevent allergic reaction to which ever seafood you will be eating, sprinkle a small amount of bissy powder over the meat, about 5 minutes before the total cooking time.

Make tea
Put 1/2 cup of water in a small pot over high heat, when the water begins to boil, add 1 tsp. bissy powder. Stir, boil for 2 minutes with the pot uncovered.
Remove pot from heat, strain off the liquid then sweeten with sugar and drink it immediately Drink the tea before eating the seafood, If you get food poisoning from eating any other food, drink the tea, it is very effective. Watch video here