Cassava has been apart of Jamaica’s history. The native Jamaicans (Arawak Indians/Taino Indians/Native Americans) grew cassava among other staple foods for daily consumption. How to use cassava to make dumplings

Arawak Indian/Taino
Indian/Native Americans.
Should not be confused with
Indians from India (East Indians). They are two different groups. East Indians came to Jamaica from India in 1845 as paid slaves (Indentured labourers)

Cassava root, is dark brown on the outside while the inside is grey or reddish. Some varieties taste sweet while others are bitter. Cassava is a product that can withstand heat and drought and needs little or no fertilizer,Compared to corn, potatoes, beans, and bananas, cassava is the most adaptable.

Cassava is also dangerous. Like any other tuber, cassava can release toxic substances such as hydrocyanic acid. It must therefore be properly prepared and cooked before consumption. Although cassava is rich in starch and calories, it is unhealthy to have a diet based mainly on this root. Moreover, the plant is susceptible to certain pests and diseases. Cassava can also used to make bioplastic.

In olden days, Jamaicans used starch powder to starch their clothes before ironing them. This process is called 'starching'.  The process of 'starching' involves soaking items of clothing in the cassava-starched water, putting them to dry, then ironing them.

How to Extract starch from cassava

Extracting starch from cassava roots is a complex progress. The tubes are peeled and chopped then grated. The starch is extracted, and water is removed again. . The production process generates huge amounts of starch-rich waste water – and when that ferments, it produces methane, a highly toxic climate killer.The final product is a pure starch powder which used both for food and in the chemical industry. This damage the climate because the waste it produces contains a large amount of organic compounds. 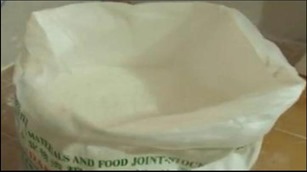 Green house gas impact on the climate is 25 times more harmful than carbon dioxide (CO2). That gas can be captured then use it to fuel factory boilers, what was a waste product is now a valuable biogas.