The breadfruit Voyage to Jamaica 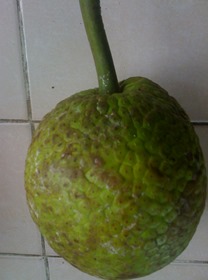 Named for the fact that its thick, white, starchy interior is reminiscent of bread, the breadfruit was in high demand by 18th century British West Indian Planters, particularly those in Jamaica.

Between 1780 and 1786 Jamaica suffered from alternating hurricanes and long periods of drought that destroyed crops. Slave provision grounds were hard hit and there was a major food shortage. The planters were concerned because they knew that without a reliable food source, their slaves would die of starvation. From as early as the 16th and 17th centuries, there had been talk of a tree in the Pacific Islands that provided a source of 'bread' all year round. The planters offered large rewards to any captain who would bring back such a miraculous plant. When this failed they petitioned King George III to organize a special expedition to find and deliver it. Capt. William Bligh, an experienced 33-year-old seaman who had sailed with Capt. Cook on his second voyage around the world from 1772-75, was named commander of this expedition. His crew, including first mate and good friend Fletcher Christian, set sail from Portsmouth, England for Tahiti and Timor on The H.M.S. Bounty a few days before Christmas, 1787. Their mission- to collect seedless breadfruit plants and deliver them to Jamaica.

Some ten months later, The Bounty arrived in Tahiti, set up camp, and Bligh began the process of collecting the plants. So tireless was Bligh's pursuit of the plant that he soon earned the nickname "Breadfruit Bligh". Five months and over 1000 plants later, Bligh decided to set sail for the Caribbean. Two weeks into that 1789 ocean voyage, however, members of his crew, led by first mate Christian, mutinied. They set Bligh (and 18 crewmembers who remained loyal to him) adrift in an open boat and threw the breadfruit plants overboard. Some were even used to stone Bligh. This treasonous act, which was turned into a famous history now terms the most famous mutiny ever, may have been committed because Christian wanted to return to Tahiti where he had found his true love. Others say the reason for the crew's anger was Bligh's arrogance and his excessive concern about the survival of the precious breadfruit cargo; Bligh is said to have denied crewmembers water in favour of using it to irrigate the plants. The mutineers set a course for Tahiti, leaving Bligh with very little food, dependent on his pocket watch, sextant and his navigational skills for survival. Luckily for him they were outstanding. Bligh completed what many feel is still one of the greatest recorded feats of navigation. He covered over 3600 miles in 41 days before setting foot back on land. It is no wonder that many consider Bligh one of the greatest sailors to have ever lived. (Only one of the eighteen men with Bligh died and that was due to stoning by angry natives on an island where they tried to land for provisions).

As for Bligh, he was exonerated and sent on a second voyage to collect the breadfruit for the West Indies. This time he set sail with more men and more ships. Although he suffered from fevers and migraines during this second voyage, he managed to deliver over 2000 plants representing five different varieties to the Caribbean. On February 5, 1793, his ship, The HMS Providence, landed in Jamaica, stopping first at Port Royal and moving on to Port Morant where some of the trees were unloaded and planted at the Bath Botanic Garden where some of the trees remain today. Plants were also distributed to other parishes. This was not Bligh's first visit to Jamaica ­ he had lived in Lucea, Hanover from 1783-1787. Bligh was awarded 1500 guineas by the Jamaican Assembly. The breadfruit grew naturally on Jamaican soil, but it took many years before the slave population would attempt to eat the fruit they regarded as strange. Today, the breadfruit tree can be found all over Jamaica and enjoys strong ties to Caribbean cuisine. 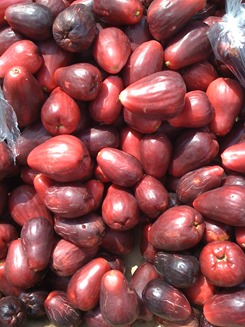 On that 1793 voyage, Capt. Bligh also introduced what we now call otaheite apples. Their name comes from their island of origin ­ Tahiti, which in the 16th and 17th centuries was widely known as Otaheite.

Bligh's connection to Caribbean cuisine does not stop there, however. He also has ties to Jamaica's national fruit ­ the ackee. Found all over the island, the fruit is borne in clusters on evergreen trees. Its name is derived from the West African Akye fufo. The tree is not endemic to Jamaica but was introduced from West Africa during the 18th century. The plant was further named Blighia sapida in honour of Capt. Bligh who took samples to London's Kew Gardens in 1793. Sapida speaks to the fruit's savouriness. Although ackee has been introduced to many other countries, Jamaica remains the one where it is most widely eaten. In some African countries, however, ackee skin is used as a soap and pulverized ackee as fish poison.