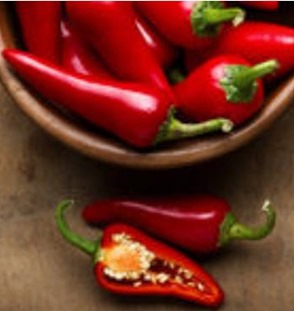 Peppers, or capsicums, are members of the nightshade family and may divided into two categories---sweet peppers and hot peppers (also known as chili peppers or chillies).

Peppers range in flavour from mild and sweet to blisteringly hot. Although it is sometimes difficult to distinguish a sweet pepper from a hot one by sight, it is a general rule that the smaller the pepper, the higher the heat level.

Choose fresh peppers that are firm and heavy for their size, with a richly coloured, shiny skin. Avoid limp, shrivelled, soft, or bruised peppers.

For best quality, wrap fresh peppers loosely in paper towels and store in the refrigerator for up to two weeks. 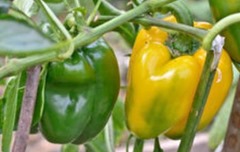 Sweet peppers include bell, sweet banana, and pimiento peppers, with most being available year-round.If left on the vine, green sweet peppers will ripen to a red or yellow colour, with a softer texture and sweeter flavour.

Fresh sweet peppers have a mild flavour and a crisp, crunchy texture that make them a popular addition to salads and vegetable trays. They are also sautéed, baked, grilled, and roasted. 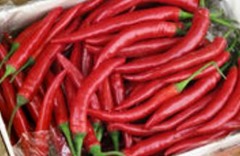 The name of chillies are essentially  based on their colour, shape, place of origin, and hotness. Many chillies are available in both fresh and dried forms. Because of the similarities in appearance, recognizing some chili peppers takes practice.

However, is determined by a substance called capsaicin, found mainly in the veins or fleshy ribs of the pepper, removing the veins and seeds will tone down the flavour. Wearing plastic gloves while handling chillies  is recommended to avoid being burned by the capsaicin.

Mild chillies are lighter green in colour and have a more blunt tip than hot ones. The weather, soil, and level of maturity the peppers have reached can result in mild and hot chillies growing on the same vine. This makes it difficult to determine the best level of an individual variety.