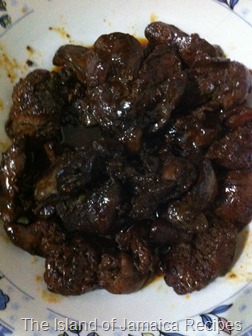 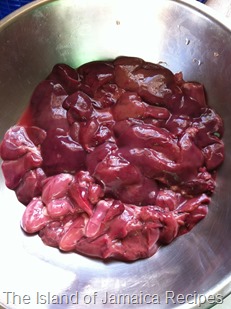 Ingredients
1 lb. chicken livers, washed with vinegar or lime and water solution (1 tbsp. white vinegar or the juice of 1 lime mixed with 1 cup of water), put to drain off excess water
1 tsp. ground black pepper
1/2 tsp. hot chili powder
1/2 tsp. garlic powder
1 tsp. crushed red pepper flakes
Salt to taste
1 tsp. Maggi  Season-up! chicken flavour
1 tsp. Maggi Season-up! all-purpose
2 slices onion, minced
1 tbsp. coconut oil
To make sauce
4 tbsp. brown sugar
1/4 cup water
2 tbsp. white vinegar
1/4 cup (4 tbsp.) ketchup
1 1/2 tbsp. cornstarch (optional) (I did not use it, but it can be used)
Dash of soy sauce (less than 1/8) (I did not use it, but it can be used)
Method
step1
In a bowl, season the chicken livers with black pepper, chili powder, garlic powder, pepper flakes, salt, Maggi season-up chicken flavour and all-purpose and minced onion. Cover and set aside for 30 minutes (optional)
step2
Put a skillet or Dutch pot with coconut oil to hot over medium heat. Lower the heat when the oil becomes hot. Put several chicken livers in the hot oil. Fry each side until slightly brown (2-3 minutes for each side). Continue the steps until all the chicken livers have been fried. Put the fried livers into a bowl. Reserve the dripping from the seasoned livers.
step3
Use the same pot to make the sauce because the flavour from the fried liver is in the pot. Pour out the  oil from the pot. Add the water, ketchup, salt, vinegar, piece of hot pepper (optional)dripping from the seasoned livers and sugar (if using the cornstarch and soy sauce, add them as well). Stir, cover the pot and cook sauce until it started to thicken, add the chicken livers, spoon over the sauce on the livers. Remove pot from heat when the sauce is of a thick consistency. Best served with cooked rice.  This is for 4 servings