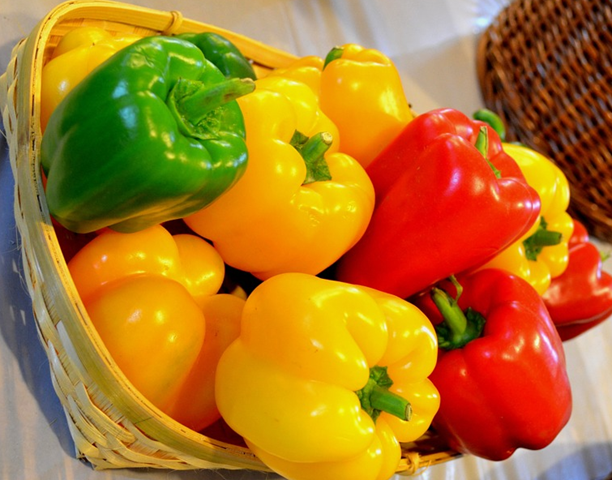 The bell pepper, sometimes ambiguously known simply as "pepper" or "capsicum", is a type of large mild chilli pepper that is considered by many to be without heat. Bell peppers are often considered to be merely vegetables, not spices, even though some people find them to be slightly hot. Bell pepper is called “sweet pepper” in Jamaica

Bell peppers are green while developing and then ripen to a variety of colours, of which red and yellow are the most common but purple and orange are also found. They are edible while still unripe and have a distinctly different (and milder) taste in that state. Compared to green ones, red ones have three times as much vitamin C and 11 times as much beta carotene. Red ones are often heated over a fire, such as a gas range, to remove the skins. Some methods of doing this can add a distinctive smokey flavour.

Bell peppers are commonly added to pizza, stir-fry, and sweet and sour. They can also be opened at the top and deseeded, then stuffed and baked.

For general usage: slice in half lengthwise, then remove the stem, core, seeds, and white veins.

Green (unripe) bell peppers are available all year, with their peak season falling between July and November. The ripe varieties are more sensitive to season and will reach their peak towards the end of the green pepper's season