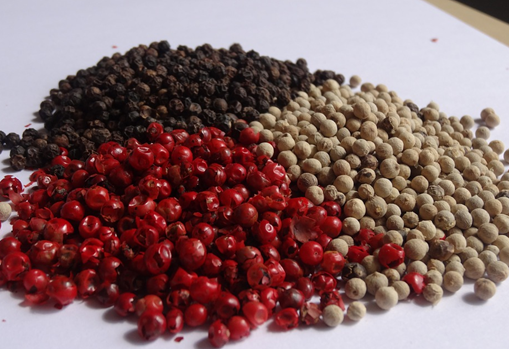 Black pepper is a seasoning produced from the fermented, dried, unripe red berries of the plant Piper nigrum. (The same fruit, when unripe green, can be dried, or preserved in brine or vinegar, to make green peppercorns; or when ripe, dried and dehusked to make white peppercorns.) Read about bell peppers

Ground black pepper may be found on nearly every dinner table in some parts of the world, accompanied by its constant companion salt.

Cooking with Pepper
Black pepper is generally used when you want it to show up in the dish (especially in a whole or 'cracked' form) and white pepper when you do not want it visible in the finished product.

Grinding pepper releases flavourful volatile oils that evaporate after time, so the full flavour of pepper is obtained when it freshly ground onto food at the end of cooking or after serving