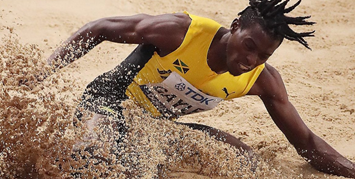 National champion, Tajay Gayle surprised the world when he leaped to a historical mark of 8.69m in the long jump at the 2019 World Championships in Doha Qatar.

The young star that hails from the University of Technology delivered a stunning performance in his first attempt, jumping 8.46m, a mark that his competitors failed to surpass even after the last attempt. Despite getting 2 consecutive no jumps, Gayle made a master jump of 8.69m to secure Jamaica’s first gold medal of the championships.

The 23-year-old now holds the 10th longest jump in the history of the event, as well as the world-leading mark for the 2018-2019 season. He is also the first Jamaican athlete to ever win gold in the event.

The MVP standout is still full of many capabilities and definitely will be a force to be reckoned with in years to come.