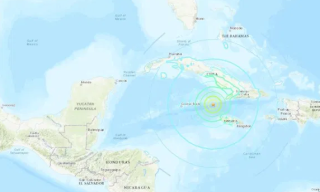 A 7.3 magnitude earthquake hit off the island of Jamaica Tuesday afternoon.
The quake was recorded 117 kilometers northwest of Lucea, Jamaica.
RJR News has received reports that the quake was felt in Kingston and St. Andrew, St. Catherine, Portland, St. Mary, St. Thomas, St. Elizabeth, St. Ann, St. James and Manchester.
The Office of Disaster Preparedness and Emergency Management (ODPEM) has said tsunami waves reaching 0.3 to 1 metres or 3 ft above the tide level are possible for Kingston, Jamaica by 3.20 p.m.
The seismic activity had a depth of about 6.2 miles.
An earthquake of this scale is categorized as a major quake and can cause serious damage.
Affected countries include The Bahamas, Cayman Islands, Jamaica, Haiti, Honduras, and Cuba 134 km from Montego Bay.
The United States Geological Survey says so far, 102 people have reported that they felt the earthquake.
There were also several smaller quakes reported in and near Puerto Rico today.
Trinidad & Tobago
Another earthquake with a magnitude of 5.3 rocked parts of Trinidad Tuesday morning.
There was no immediate report of damage or injuries.
The Seismic Research Centre said the quake was felt 36 miles west south west of San Fernando.