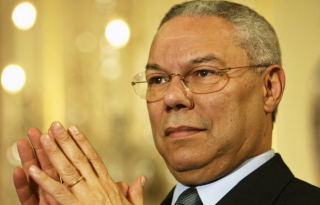 Former US Secretary of State Colin Powell died on Monday, aged 84 from corona virus complications; he was fully vaccinated

The death of General Powell, born in New York to Jamaican immigrant parents, was confirmed by his family.

"We have lost a remarkable and loving husband, father, grandfather and a great American," the family's statement said.

"We want to thank the medical staff... for their caring treatment," it added.

Mr Powell, a moderate Republican who broke with his party to endorse Barack Obama in 2008, became a trailblazing symbol of Black success, serving as Chairman of the US Joint Chiefs of Staff, National Security Advisor, and Sescretary of State.

Earlier in his military career he was wounded in Vietnam, an experience that later helped define his own military and political strategies.

The BBC noted however that for many he is associated significantly with the role he played in garnering support for the 2003 Iraq war. Years later he admitted that his speech to the United Nations Security Council using faulty intelligence to garner global support for the war was "a blot" on his record.

General Powell grew up with a keen awareness of his Jamaican ancestry and often spoke about its impact on his life. He traveled to Treasure Beach on the island's southwest coast for an intervew with famed US journalist Barbara Walters at Sunset Resort. That location was just a few miles down from the village of Top Hill, St. Elizabeth where his father originated.

He was a key member of the Jimmy Carter led election observer mission which monitored Jamaica's 1997 general election, the first time the country was having international observers for an election.

He maintained a strong bond with Treasure Beach, as Jason Henzel, Chairman of the Treasure Beach Foundation - Breds, and of Jakes Hotel, Villas & Spa: "Several years ago I was honored when General Colin Powell agreed to the Challenge (Ropes) Course at the sports park we named in his honour. He also agreed to a video interview where he speaks of his Jamaican heritage and the importance of youth leadership. He was a leader who made Jamaica and particularly St Elizabeth very proud."