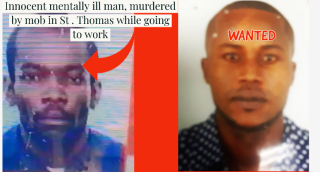 The man killed on Wednesday morning by a mob in Llandewey, St. Thomas after he was mistakenly identified as the suspect in the abduction of two girls in that parish, suffered from a mental illness and wandered into the community when he was attacked.He has been identified as Levi Chambers, a car detailer.

Mr. Chambers was employed to a car rental company and was a resident of Southaven in Yallahs, St. Thomas. Mr. Chambers left home for work on Wednesday morning but lost his way and ended up in Llandewey.

Residents reportedly saw him walking along the Llandewey main road, stopped him and questioned who he was. It's reported that Mr. Chambers ran and was chased. He ran into bushes and across the Yallahs river. Mr. Chambers was held by the mob and stabbed several times in the abdomen. Superintendent Allison Byfield, Commanding Officer for the St. Thomas Police Division, said a police team was alerted shortly after the incident. They took the man to hospital where he was pronounced dead. The police are trying to find the members of the mob that killed Mr. Chambers. Superintendent Byfield has appealed to resident to desist from carrying out mob killings