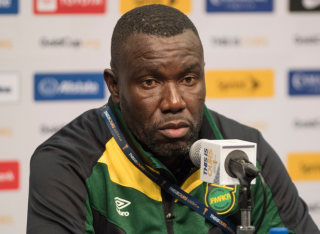 Coach Theodore Whitmore, will not be in charge of Jamaica's Reggae Boyz When they face Mexico at the national stadium on January 27 in CONCACAF World cup qualifing action. Reports are that the former reggae boyz world cup goal score is to be relieved of the responsibility of coaching the national team with the reggae boyz, precariously placed in six spot

At the halfway stage, of the qualifiers with just seven points from seven matches and seven points. adrift on the fourth place playoff spot, which is currently occupied by Panama with 14 points. The Jamaica football Federation is reported to be disgruntled, with the return so far from coach Whitmore, which has left the team facing an uphill battle to qualified for next year as the world cup finals in Qatar, Assistant coach Paul Hall and former England midfielder Ricky Hill are reported
to be the front runners to take charge of the team through their remaining qualifiers. Whitmore latest stint as the national head coach started in 2016, when he took over after the JFF parted company with German coach Winfried Schäfer. The team under his latest stint has won 23 games drawn 14.

And the last 17 for a 42.59 winning percentage from 54 matches, Whitmore was previously in charge of the 2014 world cup campaign before resigning in 2013, after a 2 nil lost to Honduras . In the meantime, there are reports that some members of the national squad are planning to take action, if coach Whitmore is fired