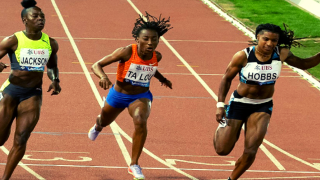 Elaine Thompson-Herah, a two-time Olympic sprint winner, was disqualified from the women's 100-meter race at the Diamond League competition in Lausanne on Friday after Jamaican Shericka Jackson came up short against American Aleia Hobbs in a close race.

Thompson-Herah shocked the crowd by emerging from her blocks before the gun to further thin the field after Shelly-Ann Fraser-Pryce, another Jamaican, withdrew earlier due to a muscular strain she sustained during warm-up.

In a race advertised as a rematch of the most recent global final, where the Jamaicans swept the medals in Oregon, the 35-year-old Fraser-Pryce was the hot favorite.

Ivorian Marie-Josee Ta Lou came in third with a time of 10.89